60+ residents required emergency rescuing by the state in the summer of 2016 at the Benchmark Healthcare nursing home in Festus, Missouri. Why? Nursing home owner Johnnie Mac Sells admitted to spending more than half a million dollars from Medicaid, intended for resident care, on strippers, online gambling and resort fees at his local country club. This is yet another example of how nursing home Medicaid fraud kills and injures vulnerable residents.

Nursing Home Injuries Due to Greed

52 year old Mac Sells bleeded the facility of much needed resources in order to fund his personal lifestyle. As a result of the draining of funds, the nursing home care diminished greatly. Employees were not paid on time. Invoices were not paid to vendors. At one point, the phone company shut off the phone lines to the facility, making resident-to-family communication impossible. Facility staff had to run to the grocery store and pay for food out of pocket in order to feed residents. This Missouri nursing home deteriorated into a ‘dirty and dangerous place.’ 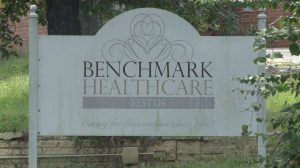 Benchmark Healthcare was cited in a federal inspection for:

The State of Missouri placed the facility in emergency receivership and froze admissions into the nursing home. The facility was permanently shut down in September.

What Went Wrong, and When

Apparently, the nursing home owner Johnnie Mac Sells began stealing Medicaid money in 2013. In subsequent years, Mac Sells used the nursing home corporate credit card to fund his lifestyle, including large credit card charges for pet grooming ($15,000), strippers ($185,000), casinos ($5,000) and country clubs ($12,000). Sells was arrested last year for domestic abuse and sexual misconduct. In order to get out of jail, he used Medicaid nursing home dollars to post bail. Sells admitted to Medicaid fraud in court in an attempt to reduce his upcoming prison sentence. He attributes his wayward actions to a drug and alcohol addiction.

Nursing homes that rely on Medicaid payments are cash-strapped as is. Every penny that Medicaid pays a nursing home for patient care should be utilized to better the resident, not to line the pockets of the corporate owners. Medicaid pays significantly less for nursing home care when compared to private patient pay or private insurers. This means facilities must make every Medicaid dollar count. When a nursing home commits Medicaid fraud and fails to use the funds to improve resident care, the results are disastrous. Usually this results in a slashing of staff and the use of substandard equipment. When an understaffed, underfunded nursing home takes on high-acuity level residents, injury and/or wrongful death is bound to occur.

Medicaid fraud leads to less nurses on the floor. Less nurses and more patients is a recipe for nursing home negligence. Common injuries we encounter in understaffed nursing homes include:

The Collapse of Legacy Health Systems

Source: Nursing Home That Ran Out of Food Was Part of Financially Troubled Company.

If your loved one was injured or killed inside a nursing home due to negligence, contact our nursing home abuse law firm toll free for your free consultation. Call us now at 1-844-253-8919.